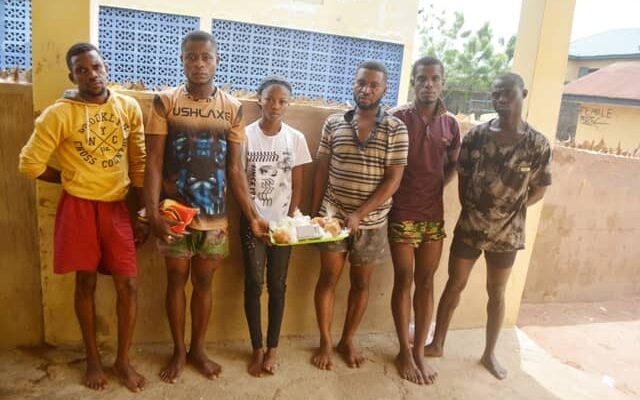 A 17-year-old female has been arrested alongside five other males over allegations of peddling drugs for operatives of Eastern Security Network (ESN).

The Imo State Police Command announced the arrest of Princess Samuel,  and other members of the drug syndicate in a press release on.

“Following a diligent technical intelligence gathering that led to the arrested of one Obinna Ohaji ” M ” age 28 years, who disguised as a driver in search of passengers in a Nissan Caravan bus with the inscription ” ENDLESS GOD ” and registration number ABUJA,  KUJ 88 XC incompany of one Samuel Egwi ” M” age 36 years along Warehouse bus stop Owerri, Imo State.

“He then voluntarily led the command’s tactical teams to the border between Imo State and Rivers State where the receiver, one Princess Samuel ” F” age 17 years was arrested.

“She confessed to be the one who supplies the Rivers State axis of the terror group and led the tactical teams to the house of the drug Baron at  Umuaka in Njaba local government area of Imo State, where one  Nnamuka Uchenna ” M” age 32 years was arrested.

“On searching his premises more quantities of the white substance suspected to be cocaine and the scale for measuring the quantity to be sold were recovered to the station.

“Also arrested in their residence are Chinedu Ukaegbulam ” M” age 20 years and Augustine Ete ” M ” age 39 years, in charge of a Nissan Caravan bus with the inscription ” ENDLESS GOD ” with registration number IMO , EBM 297 XA . They are believed to be the ones who distribute the drugs to the various terror Camps in the state.

“The Imo Police command notes that  investigations are still on-going to trace the source of the hard drugs into the state and also to arrest other members of the syndicate in hiding,” he said.